Supreme Leader Rejects Talks as Solution for Solving Problem with US

Supreme Leader of the Islamic Revolution Ayatollah Sayyed Ali Khamenei in a meeting with Basij volunteer forces on Saturday said the talks will not solve “our problem” with the United States.

The problem will be solved solely through “tribute,” not tribute for one time but for always, the Supreme Leader noted at his meeting with a group of Basij volunteer forces in Tehran this morning.

Can a zealous Iranian do what the US wants? the Supreme Leader asked.

Referring to the geopolitical position of West Asia, Iran in particular, the Supreme Leader said the American officials, as they confessed in 2006, had planned to cripple Islamic Republic’s neighboring countries; they said they should first topple Iraq, Syria, Lebanon, Libya, Sudan, and Somalia, and then come to Iran, the Supreme Leader noted adding that Islamic Republic did not enter [issues related to]

North Africa, but it adopted a policy on Syria, Iraq, and Lebanon whose outcome was the US defeat there.

Basij is not only for the battlefield but also for all fields including science and religion, the Supreme Leader underlined.

The Supreme Leader described the Basij as an organization beyond a military body and said Basij is a culture and an ideology.

The Supreme Leader delivered a speech to the Basij forces and his speech was broadcast live.

Also, about five million Basijis from across the country attended the meeting through video conferencing.

The meeting was held on the occasion of Basij Week, starting on November 26, to commemorate the formation of Basij about 43 years ago by the order of the founder of the Islamic Republic, Imam Khomeini. 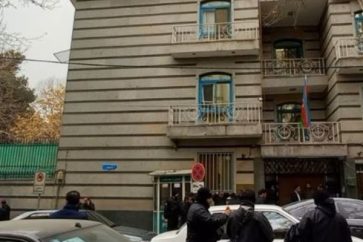