Caretaker Prime Minister, Najib Mikati, on Thursday chaired a meeting by the ministerial committee tasked to follow up on the return of Syrian refugees to their homeland “in safety and dignity”.

In the wake of the meeting, Caretaker Minister of Social Affairs, Hector Hajjar, said that the meeting took stock of the Syrian refugees’ return dossier.

“Opinions were consistent, and it has been emphasized that the Ministry of Social Affairs is following up on this file in coordination with the Ministry of Foreign Affairs; things are on the right track,” Hajjar said.

Replying to a question whether he feels that the position of the international community supports the return of Syrian refugees, especially in light of the aid provided by them, Hajjar said: “The international community has its position and its reasons. As for the position of the Lebanese state, it is known and clear and was voiced in Brussels. We are constantly following up on this file in a vigorous and accurate manner, but we cannot act as if we are alone. The issue concerns Lebanese ministries, the Syrian state, the international community, and the UNHCR, so we cannot take a solo step. Steps must be integrated despite the lack of understanding among them, but the path stemming from dialogue must be adopted in a bid  to reach the aspired goal.”

With regard to the final number of Syrian refugees in Lebanon, Hajjar said: “According to recent data, the number exceeds one and a half million Syrian refugees on Lebanese territories. However, it’s quite evident that any changes in the region, especially economically, immediately wind up increasing these numbers — through refugee entry via legal and illegal crossings.“

Regarding measures to control crossings, he said: “We’ve discussed this issue with the Ministers of Defense and Interior, and we are trying to understand well all the details related to this file to deal with it.”

Mikati separately met with caretaker Minister of Health, Dr. Firas Al-Abiad, who said: “In today’s meeting with the PM, we discussed health issues and citizens’ affairs in Lebanon. The first topic is the means to ensure medicines for cancer and incurable diseases, and the plans undertaken by the Ministry to mechanize the process of distributing medicine.

It has been agreed to provide funding for the next three months, and to increase it by USD 5 million per month, which will be allocated to increasing the supply of medicines for cancer and incurable diseases.”

Abiad added, “As for the second issue, it is that of hospitalization, and the sufferings that citizens face at the gates of hospitals. There is a sum that has been approved at Parliament from the budget reserves of approximately LBP 1,600 billion for the Ministry of Health. We have prepared plans to use this amount, and there will be an increase in financial ceilings and an increase in tariffs, which will hopefully alleviate the sufferings of citizens.”

Mikati then met with caretaker Minister of Foreign Affairs and Expatriates, Abdullah Bou Habib, with whom he discussed ministerial affairs, the United Nations meetings in New York, in addition to the transfers of foreign diplomatic corps and the budget of the Ministry of Foreign Affairs.

Mikati finally met with Caretaker Minister of Communications, Johnny Corm, with whom he broached an array of ministerial affairs. 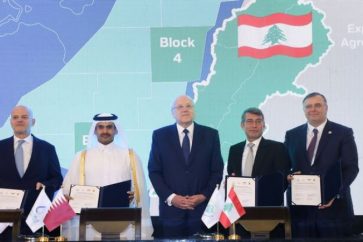