Iran’s nuclear chief has said the country will launch the construction of the Arak IR-20 reactor next year, according to a lawmaker.

Head of the Atomic Energy Organization of Iran (AEOI) Mohammad Eslami made the remarks during a meeting with the Iranian parliament’s energy committee on Sunday.

Mostafa Nakha’ee, the spokesman of the committee, quoted Eslami as saying that the AEOI aims to reach the nuclear electricity production capacity of 8,000 megawatts (MW) and constructing a nuclear plant in the near future.

“The production of 8,000 MW of nuclear power and the production of power plant fuel show that the nuclear industry in Iran as a technique and specialty is growing and has been directed toward energy production,” Nakha’ee added.

Last month, Eslami said the government would speed up funding for the construction of the second and third units at Bushehr Nuclear Power Plant where current electricity generation capacity is limited to 1,000 MW per hour.

“AEOI’s plan in the short run is to reach production of 8 gigawatts through diversified arrangements by tapping domestic resources and major international investment companies,” he said.

In an interview with Sputnik Iran published on Sunday, the nuclear chief explained that the AEOI has set a goal to meet 50 percent of the country’s new demand for 10,000-16,000 MW of electricity by building new nuclear power plants with a combined capacity of 8,000 MW.

The AEOI has ramped up Iran’s nuclear program in recent years, particularly after the parliament’s ratification of a strategic action plan in December 2020 as a response to the United States’ withdrawal from the Iran nuclear agreement in 2018. 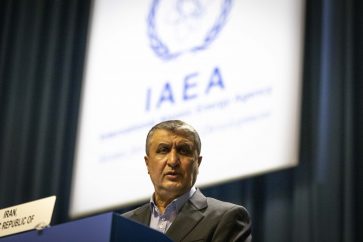 Production of 60% Enriched Uranium in Progress in Iran: Official